As part of our ongoing commitment to providing self-publishing authors with valuable tools, knowledge and insights, we are proud to share this article from one of our partner organizations (credits and partner link backs at the end of the article). Interested in becoming a partner of MyBookPrinter and having your thoughts and ideas shared? Contact us here!

A case study on the cinematic book trailer for Secret Keeper.

Book trailers remain a new and unique way to engage readers and build fan bases. Even though they’ve been around for a bit, a lot of people don’t know about them, which means there’s still time to be innovative with how we use video to market books. The question isn’t “Do book trailers work?” Video works, and it’s what most people are engaging with online at any given moment. The term book trailer means a video of any kind that promotes a book or its author. So, the question becomes what kind of book trailer should you create—whether it’s DIY or through a professional book trailer company—and how do you get the most use out of making one? For anyone who’s not familiar with film production and has never made a video before, it’s hard to know where to begin. Below is a case study of a young adult book trailer produced by Film 14.

Two years ago, we signed on to make a book trailer for the second book in Jane Alvey Harris’s My Myth Trilogy titled Secret Keeper. We’d created a trailer for Jane’s first novel in the series, Riven, which you can check out here. Jane loved seeing her characters brought to life so much she decided Secret Keeper should have a trailer, too, with the same actors from the Riven trailer, which included Kelle Cantwell and Chase Coleman from The Originals.

Secret Keeper is the sequel to Riven, a young adult novel about Emily, a 17-year-old girl whose past abuse has forced her to create a mythological universe with fairies, elves, and fictional kingdoms in order to deal with her trauma. The first step in the book trailer process is to read the novel and adapt a short scripted visual treatment. The trick is to reveal the plot sparingly, giving the viewer enough of a taste to know whether this is the sort of book that would interest them, and encourage them to learn more. Here’s how the 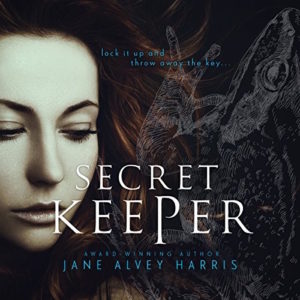 treatment we created for Secret Keeper turned out. We normally use placeholder images taken from existing movies since the document remains internal. For the sake of this article, we’ve used images we created for both of the trailers.

After the author approves the treatment, we head into casting. The first question any author needs to answer is whether they want to see the characters’ faces in the trailer. Some authors prefer to leave the distinct features negative, only showing portions of faces so as not to influence the reader. Other authors like the idea of seeing their book adapted, not only for the fun of watching their creations come to life, but because it also sells the idea of the movie in a more visual way. Either decision is valid, and in either instance we ask the author to give us their top two or three choices using existing actors as a reference. Jane mentioned Sophie Turner for Emily and Chris Hemsworth as Gabe.

In this case, however, we were making a sequel, so we ended up using the same actors we used in the Riven trailer. The next thing to do is to shoot the book trailer. Production took place on location in the Hollywood Hills with the author in attendance. It’s pretty rare for an author to come to set, and Jane had a blast watching us bring her world to life. We made this behind-the-scenes video of the making of Secret Keeper not only to commemorate the experience, but for Jane to use on social media and share with her fans.

This is how the final book trailer turned out.

Upon release, the trailer was picked up by a dozen or more literary blogs and websites that are YA-friendly. Jane had us create shorter versions of the trailer that we re-edited and then formatted for Instagram. The trailer continues to reach new fans every day, and the great thing about this trailer, and all book trailers, is that, unlike movie trailers, they’re available online for as long as the book is out there.

Harris’s first novel, Riven, is currently being adapted into a feature film.

Adam Cushman is an author, director, and producer. His novel CUT was published by Black Mountain Press in 2014. He’s also published over 40 short stories in literary journals. In addition, Cushman has directed two feature films, Restraint (2017) and The Maestro (2018). He is the owner of Film 14, the leading producer of book trailers.

This article was originally published in IBPA’s Sept/Oct 2019 magazine.

Within IBPA membership, those members who only published their own work without the involvement of an established publisher are called Author Publishers. Author Publishers manage the entire publishing process, hiring the right people/services to edit, design, publish, and distribute. Author Publishers constitute 35% of IBPA’s 3,000 members.